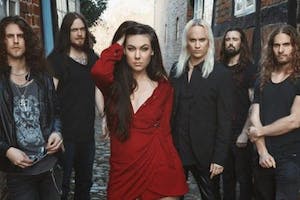 iCal
Google
Amaranthe at Come and Take It Live

March 2013 saw the release of "The Nexus" where everything was upped a notch. Featured was more of the band's innovative mix of melodic pop, harsh screamo metal, and techno-influenced hard rock. Extensive touring followed, more chart entries garnered (Top 10 entries both in Sweden and Finland, #12 on US Billboard Heatseeker chart etc.).

Now their career on an ever-upward trajectory, October 2014 saw the release of Amaranthe's 3rd outing MASSIVE ADDICTIVE. Third time seemed to be the charm, as the album immediately charted in six countries, even manning the pole position on the Billboard Heatseekers chart. The album also yielded Amaranthe's first major single hit with "Drop Dead Cynical", which stayed several weeks at the top of USA's premier rock station, Sirius XM Octane, and had massive airplay all around the world.

With their 4th album now nigh, the secrets and evolution of the sound yet remain behind a veil, but now it almost goes without saying that connoisseurs of shiny modern metal have much more to look forward to from this unstoppable hybrid metal record-breaking machine!

Followers and copycats come and go, but Amaranthe remains the leader of the pack.

Battle Beast is a Finnish metal music band established in Helsinki in 2008.

One fateful day in Boston, some years ago, two immortals crossed paths in a bookstore. He was of many, many notes, and she was of darkness and the old world. Such was the birth of Seven Spires, and so it shall always be. With the fortunate additions of old friends Chris and Peter, the family was complete: though young in countenance, the four were armed with highly specialised training from Berklee College of Music, as well as an insatiable drive to earn that which they hungered for: the world.

In their early years, they shared bills with the likes of Arch Enemy, Apocalyptica, Sonata Arctica, Fleshgod Apocalypse, Epica, The Agonist, Butcher Babies, Amaranthe, Kreator, Huntress, Carach Angren, and others. They completely sold out of records, twice, and then ventured to Gate Studios in Wolfsburg, Germany to finish recording their new album with the illustrious Sascha Paeth.