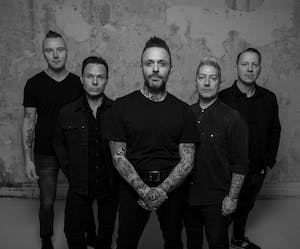 “These songs should make you want to fall in love with somebody, or miss somebody, or want to do something outrageous with your life,” says Justin Furstenfeld, vocalist and lyricist for the unstoppable alt-rock band Blue October. He’s talking about the tracks on the quintet’s tenth studio album, This Is What I Live For, releasing in September 2020. The first single, ‘Oh My My,’ is sure to make a lasting impression.

The San Marcos, Texas-based band (vocalist Justin Furstenfeld, multi- instrumentalist Ryan Delahoussaye, bassist Matt Noveskey, drummer Jeremy Furstenfeld, and guitarist Will Knaak) have earned a reputation for being remarkably dynamic, consistently delivering anthemic songs filled with rousing melodies and precision playing. And with this latest release, the members are even more in synch than ever because they wrote much of the material while they were on the road supporting their last album, 2018’s I Hope You’re Happy, often fine-tuning songs in front of audiences

“Every album we make is a little better than the last one, and it’s because we try to approach it a little bit differently,” Jeremy says. “That’s the thing about being a musician: you do learn as you go - you’re constantly teaching yourself. If you’re not growing, and if you’re not excited about making something new, then what’s the point?”

While Blue October’s expert instrumentation is always impressive, it is the band’s lyrics that have always truly set this band apart. Justin is unafraid to address uncomfortable or even ugly thoughts and emotions that many people may think or feel, but are unable to articulate. The lyrics on This Is What I Live For take this confessional method even further. “This album is going to catch some people off-guard,” Matt says. “A lot of it is about interpersonal relationships - years and years of marriage, growing older, and some of the issues that you may run into with that. I know that other albums are about that, but we get into some corners of life that we haven’t explored before.”

This determination to always speak the truth, even if it’s difficult, is the way Blue October has operated from the very start, since Justin, Jeremy and Ryan formed the band in 1995 when they were still in high school. When Matt joined three years later, Blue October really coalesced as the members found inspiration in bands like A Perfect Circle, Jimmy Eat World, Radiohead, and The Cure - then reworked those disparate influences into an epic yet introspective sound that is entirely their own.

During the 25 years since the band first began, Blue October’s track record proves that this ultrahonest approach is working: so far, seven of their albums have achieved chart success, amassing Fourteen Top 40 hits, writing some their best music to date. Most recently, ‘I Hope You’re Happy’ reached #14 on the Alternative chart in 2019. Their highest-charting single, “Hate Me” (from 2006’s Foiled), went to #2 on Billboard’s Alternative Songs chart.

It’s been a long and remarkable career - but, as the Blue October members themselves have admitted in characteristically candid fashion, things certainly haven’t always been easy. Their struggles over the years with substance abuse, and their subsequent treatment and recovery, have been well-documented in their songs. They also allowed themselves to be filmed over the course of seven tumultuous years for a documentary, Get Back Up, which will be released in May 2020. The film takes an unwavering look at the band - and Justin, in particular - as they grapple with the fallout from addiction and the resulting damage done to their families, professional relationships, and each other. It is ultimately a redemptive story, with all members now sober and mending their relationships, but not without going over some harrowing ground first.

“We made it out the other side, and it was hard,” Matt says. “There were times where we weren’t sure we would. But when you go through a lot together, you grow together, and you realize what’s important. Then you realize, maybe there are things I’ve taken for granted over the years, including each other. We’re not going to let that happen anymore.” Will, who joined the band two years ago, agrees: “When a lifestyle change occurs, it filters in on all levels. Their positivity feeds mine, and I think it’s been really serendipitous that we met at a good time in all of our lives. I’m gaining a lot from their wisdom, and maybe they’re getting a little kick in the ass from my fresh perspective.”

This new optimistic outlook does not preclude them from returning to sad or depressed lyrical content, however – which they sometimes do on This Is What I Live For. “Even though we are having a more positive experience now, there is still the reflection back to our history,” Ryan says, “and while you can say Blue October is no longer in a sad, dark place, there are new songs that still look back to those darker days that are very Blue October-esque.” Justin concurs: “It’s a deeper way of thinking lyrically and melodically than I’ve ever felt before. Now it’s more like that melancholy of loneliness, but being comfortable with being alone. It’s a mature look at true sadness, but not the kind that defeats you.”

Focusing on the future with both sobriety and maturity has already resulted in a notable career resurgence: during the last couple of years, Blue October are doubling and tripling their audiences in many places, which means that the majority of their fans are sticking around - and the band continues to attract even more. And those fans, new and old, are remarkably loyal, with some attending several hundred shows - and a few who have been at every show.

After struggling with being incorrectly categorized as a “nu metal” or plain “hard rock” band for years, simply because there was no easy label to apply to a group that is so musically powerful yet lyrically sensitive, it is particularly gratifying for the members to finally gain recognition for being distinctive. “As much as people wanted to change me into something else, I always said no,” Justin says. “I’m always a reality writer. I write bluntly, for the people that want to talk about things that aren’t dinner conversation pieces.”

This unswerving belief in Blue October’s music and message - and fans’ unusually strong connection as a result - has carried this band through many good and bad times. As they head into their 25th anniversary year, Blue October members know there is probably always going to be some darkness in life - and that’s all right. As Justin says, “That’s what this new album is really about, embracing the darkness and feeling the romance in life again.”