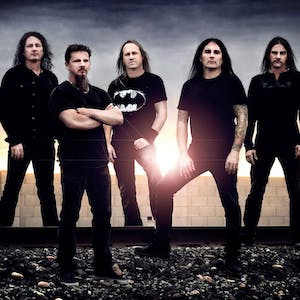 iCal
Google
Flotsam And Jetsam appearing at Trees in Dallas

Flotsam and Jetsam are an American thrash metal band, formed in Phoenix, Arizona in 1981.

We made our live debuts in local clubs and in California and had the opportunity to play with bands such as Megadeth, Armored Saint, Alcatraz, Malice, Exciter, Mercyful Fate, Riot, Autograph. Mark left and the 17 year old Michael Gilbert joined the band in 1985. Flotsam and Jetsam released two demo tapes in 1985, Iron Tears and Metal Shock. We created our own video "Hammerhead" from the Metal Shock demo in Jason's living room. We also recorded live video from the infamous club Bootleggers. Those combined with the demos made a good impression on Record labels and after we contributed to the Speed Metal Hell II and Metal Massacre VII compilations, we got a deal with Metal Blade Records.

Then we recorded our first album in Los Angeles with producer Brian Slagel. The release of "Doomsday for the Deceiver" was on July 19, 1986. Many considered this album as a milestone in the history of thrash metal and we were the first band in KERRANG's history to achieve the 6K rating. Bassist Jason Newsted, who was also the band's main lyric writer, departed soon after to join Metallica, replacing their bassist Cliff Burton who died in an accident. Flotsam and Jetsam had asked another local bassist Phil Rind, "Sacred Reich", to fill in Jason's place for a short time. We then acquired Mike Spencer from Sacramento band "Sentinel Beast". The band signed with Elektra Records before touring Europe with Megadeth in 1987.