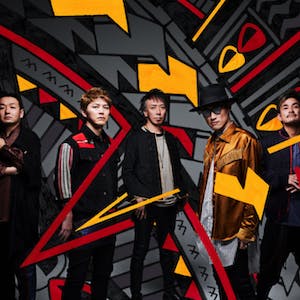 FLOW is a five-piece band that has been critically acclaimed internationally and enjoys a global following for its potent, high energy style that adeptly blends melodic driven punk, rock and pop influences with infectious hip-hop sensibilities. The band is comprised of KOHSHI (Vocals), KEIGO (Vocals), TAKE (Guitar), GOT’S (Bass), and IWASAKI (Drums). FLOW has been making music since forming in 1998 and was joined by second vocalist, KEIGO, and bass player, GOT’S, in 1999 with the current line-up cemented with the addition of IWASAKI (Drums) in 2000.