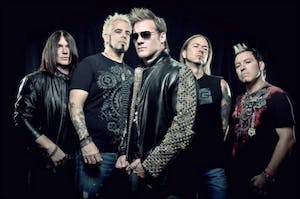 According to the series of short films broadcast on the Internet, Fozzy is a legendary American metal band who, unable to get out of their record contract, spent 20 years in Japan; when they returned to the U.S., lead singer Moongoose McQueen and the rest of the band found that artists like the Scorpions and Ozzy Osbourne had become stars by stealing Fozzy's material. In reality, Fozzy is fronted by WWF wrestler Chris Jericho, with the remainder of the group consisting of Atlanta rap-metal outfit Stuck Mojo. Shortly after the series was introduced on the site UnderGroundOnline in October 2000, Fozzy's self-titled debut album was released by Palm Pictures/Megaforce as a tie-in. A short tour and an MTV special (no doubt due to the WWF's contract with the network's parent company) led to minor recognition from the metal underground, but Jericho's wrestling commitments cut the band short after the release. Still, after Stuck Mojo wrote and released an album and Jericho won the heavyweight championship for a bit, they came back together and recorded another album, this time with writing contributions from Jericho and guitarist Rich Ward. The results, Happenstance, were released on Megaforce in the summer of 2002. 2005 saw the release of All That Remains, the group's first collection to feature all original material. The album sold over 100,000 and copies and was generally well received by both fans and critics. 2010's Chasing the Grail helped to further cement the band as not only a legitimate, populist metal act, but a force to be reckoned with as well.