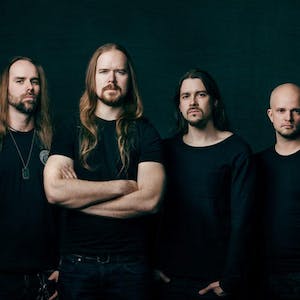 Over the last decade Insomnium has slowly but surely made itself a household name among the melodic deathsters. Formed in 1997 in a somnolent town of Joensuu, in eastern Finland, these stern men have ever since redefined the boundaries of the genre. Two highly acclaimed demos already set the standard and in 2001 the band signed to UK label Candlelight Records.

At this point the founding members Markus Hirvonen (drums), Ville Friman (guitars) and Niilo Sevänen (vocals and bass) attached guitarist Ville Vänni to the band. The triumphant line-up had been born. Debut album In the Halls of Awaiting (2002) introduced a young and fierce band that combined aggression and violent riffing to melancholic atmosphere. Marriage of Scandinavian death metal and traditional Finnish tunes, catchy but progressive, melodic but brutal – these have been the Insomnium trademarks ever since. Debut was praised all over the metal world but the band still remained the Finland’s best kept secret.

With Since the Day It All Came Down (2004) the band moved further from the beaten paths of the genre. Album was darker, more challenging and the songs took meandering pathways: a rewarding journey for those who dare to take it. Exaltations followed, the prestige grew. In 2005 Insomnium made its first real tour outside Finland as they hit the shores of UK. The road had been long, narrow and rocky, but now things started to roll.

Third album Above the Weeping World (2006) was the breakthrough. Compositions and arrangements had reached a new pinnacle and the overall sound was heavier and richer. Album was tighter, meaner and more menacing than ever. Long-time friend Aleksi Munter did the epic keyboard parts which added a whole new layer to the songs. Album took the 9th spot on the Finnish album charts, Mortal Share video blared in MTV and Insomnium made long tours in Europe and North America with bands like Amorphis, Katatonia, Enslaved and Satyricon.

New album Across the Dark (2009) shows a band that knows its strenghts but isn’t afraid to evolve. Crux of the music is still melodic death metal but nuances are giving it a unique flavor. Keyboards are overwhelmingly epic and there are some stunning clean vocals by Jules Näveri. Bit of folk metal, pinch of doom, some thrashing, a whole lot of timeless melodies and progressive twists and there you have it: ingredients of the masterpiece.

Some bands seem to harness the power of magic from the very start. Omnium Gatherum are one such band, but they are only just starting to recognise the enormity of their powers. It's time to experience The Burning Cold.

Finland's Omnium Gatherum formed in 1996 and emerged from a vibrant European metal scene with a series of acclaimed demos. With a sound that blended the raging brutality of Scandinavian death metal with a rich sense of melody and harmony, the band’s debut album Spirits & August Light was released in 2003 via UK imprint Rage Of Achilles, and received ecstatic reviews in numerous metal mags across Europe. The Finns ploughed forward for the next few years, releasing a series of critically lauded albums that further explored guitarist Markus Vanhala’s unique sonic and compositional world. From 2004's bullish and streamlined Years In Waste to 2013’s wildly atmospheric Beyond, Omnium Gatherum were gaining momentum and legions of new fans with each creative step and each successive campaign of intense live performances. Despite enduring the usual highs, lows and line-up changes, this band were plainly built for the long haul.

"People have come and gone over the years and I'm the only 'original gangsta', but the main idea's still the same," explains guitarist and chief songwriter Markus Vanhala. "We have always been about the marriage of lot of melody and really aggressive vocals. We never sound too cheesy or too aggressive. It's a chaotic balance between love and hate, melody and aggression, where those AOR melodies meet the growling cookie monster!"

In 2015, Omnium Gatherum released seventh album Grey Heavens via Lifeforce Records: both their most successful record to date and the most daring expansion of the OG sound to date. Since its release, the album has taken Vanhala and his band mates - Joonas Koto (guitars), Jukka Pelkonen (vocals), Erkki Silvennoinen (bass) and Aapo Koivisto (keyboards) - around the world, with shows in Europe, Asia and North America and stages shared with Amon Amarth, Dark Tranquillity and many more. With their profile higher than ever, they have since signed a worldwide deal with Century Media Records and have spent the last year working on a brand new studio album. The first OG record to feature new drummer Tuomo Latvala, who replaces long-time member Jarmo Pikka, the Finns’ greatest masterpiece has been completed and Vanhala is thrilled with the results.

"Omnium Gatherum is my first love and greatest passion," the guitarist states. "On this album I wanted to concentrate more on guitar-driven music, and there’s a lot of guitar melodies and more guitar solos by both guitarists! We also concentrated a lot on producing tight, succinct songs. There aren't many longer songs on 'The Burning Cold'. I could say that my songwriting has raised to a new level with this album, honestly! The album goes to both extremes: it's more melodic but also heavier than anything we've done before... but everyone says that, right? Ha ha!"

Recorded with esteemed studio guru Teemu Alto, with whom Omnium Gatherum have recorded every album since Years In Waste, The Burning Cold fulfils Vanhala's promise of more heaviness and more melody, but it's the maturity in the guitarist's songwriting and the sheer emotional weight behind these vital, inventive metal anthems that make this much more than just another record in a sturdy catalogue. Thanks to the immaculate power of Alto's production and the legendary Dan Swanö’s mixing skills, this is the biggest and most infectious album the band have ever made. From the fiery eruption of the opening The Burning and the sumptuous depths and drama of Refining Fire to the heroic death metal majesty of Over The Battlefield and the heart-rending chills and thrills of the closing Cold, this is a tour-de-force for one of the modern era's most consistently fascinating ensembles. It's also an album with conceptual depths to be explored, as Vanhala explains.

"There are two major lyrical concepts on the new album: firstly, it touches on the great human tragedies and misfortunes that are all around us. Tragedies such as war and the engulfing darkness that follows; fortunes which are tangled in experiences that we all share despite this seemingly burning world. Secondly, the lyrics speak loudly about the human emotional condition. How do we love? Why do we hate? Why are some things easier to leave behind than others? Why does death terrify us, and if it does why do people act like it does not exist?"

Metal has never been afraid to ask big questions, but rarely has a band invested such sincerity and thoughtful power into their music. The Burning Cold dares to be all things to all people: it's a dark, heavy and vivid adventure through the trouble human psyche and the turbulent world around us, but it's also an exhilarating and big-hearted celebration of the rejuvenative power of gloriously bombastic heavy music.

"It's a damn catchy album full of fresh melodic metal, bred with aggression and beauty," Vanhala avows. "There's a lot of energy, there's a lot of hope, there's a lot of gloominess, from us old geezers of metal to the metal fans! It's an honest metal album and there's no bullshit on top. No symphony orchestras, no programmed computer shit, just a pure metal band of six guys doing it for real.”

With the wind of victory very much in their sails, Omnium Gatherum will release The Burning Cold on August 31 through Century Media Records, before embarking on a relentless touring schedule that promises to take them around the world several times over the next two years. 100% dedicated to spreading the word to anyone and everyone, Vanhala's first love and greatest passion show no signs of burning out or fading away.

"We're ambitious and hungry as hell, and feels we've just started this!" he concludes. "There's a hell of a lot more still to achieve, but we still do this because we're having so much fun as group, writing and playing this music. The priority is to keep the bar high for the music. It's not about success. We always try to beat the last album and we've definitely succeeded this time. Don't worry, we’re not going away yet, not for a looooong time!"