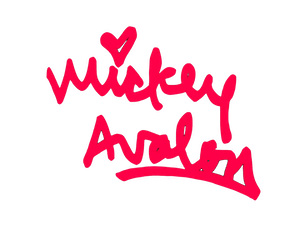 With a childhood rough enough to guarantee him rock star success, by the time he was out of his teenage years -- at least according to the few details he's given -- Mickey Avalon had sold pot (with his mother), been addicted to heroin and dope, worked as a graffiti artist in L.A., converted to Orthodox Judaism (his parents were both non-practicing Jews, and his paternal grandparents were survivors of Auschwitz), got married and had a daughter, prostituted himself for drug money, watched his father die, and found his sister's dead body. All of this gave ample material for his rhymes, which he started writing after his pal, the former MTV VJ Simon Rex, encouraged him to compose his own songs. Avalon, Rex (who rapped under the name Dirt Nasty), and Armen Melik (aka Andre Legacy) began recording and releasing their own material as the Dyslexic Speedreaders, an irreverent group that gave a satirical and often lascivious look into the L.A. club and drug culture.

Avalon's stage presence, which mixed a kind of hyper- and often ambiguous sexuality akin to the trashy glam rockers of the '70s, gained the attention of DJ and aspiring manager Kev-E-Kev, who was soon helping Avalon hawk his self-titled CD -- wrapped in a newspaper advertising adult services -- on the streets. ~ Marisa Brown, Rovi