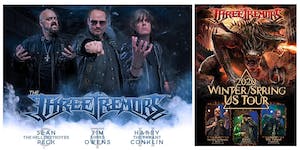 The Three Tremors is a supergroup consisting of Tim “Ripper” Owens (Judas Priest, Iced Earth, Beyond Fear), Sean “Hell Destroyer” Peck (Cage, Denner-Sherman) and Harry Conklin (Jag Panzer) – three of heavy metal’s most powerful vocalists have collaborated to form one of the most ferocious Metal Bands in existence – The Three Tremors.

With music as crushing as a sonic boom, The Three Tremors has Owens, Conklin & Peck trading off electrifying heavy metal screams backed by San Diego metal veterans David Garcia, Casey Trask, Alex Pickard and Sean Elg (all members of Cage). With strong reviews of the first song released “Invaders from the Sky”, the band did a brief yet successful tour in Europe in late 2018 prior to the album release. Once the album was released in mid-January 2019, the reviews have been mind-blowingly awesome.

For more news and updates visit our website: http://thethreetremors.com/